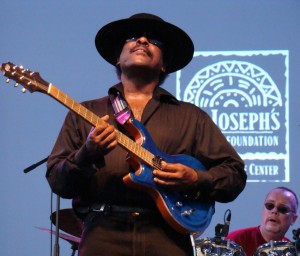 Cool John was born in Beaufort, SC in 1953.  He learned to play the guitar by the age of 3.  By age 5, Cool John played gospel music professionally and astounded musicians 10 times his age.  At that time his family realized that the world had been gifted with a musical genius.  Cool John was the featured entertainer for Lowcountry Sing on Channel 5, Charleston SC, for three  years, appearing with three of his sisters, the Ferguson Sisters, an outstanding gospel trio. Over the years, he has formed bands playing psychedelic music, rhythm and blues, pop and jazz.

Early in life Cool John made a decision to follow his dream of becoming a renowned guitarist, pianist, organist, drummer and singer.  Accomplished musicians, music industry leaders and his fans all agree that Cool John’s dream is now reality. Cool John’s fingers just seem to glide effortlessly across the guitar strings as his audiences watch in amazement.

Cool John spends his life conveying messages through his music and traveling wherever he is led by the music.  He has performed at numerous concerts and major blues festivals throughout the world to include The Savannah Blues Festival, Lincoln Center Out-of-Doors, the Lucerne Blues Festival and the Blues-To-Bop Festival in Switzerland, the Byron Bay Blues Festival in Australia and Wasago Beach Festival, Toronto, Canada.

You never know what he’s going to play next. He seamlessly combines styles of gospel, funk, country, jazz, and rhythm and blues to name a few.  He has been active on tent revival circuits, played with LaFace Records of Atlanta, GA, and collaborated with several well known artists throughout the world including Taj Mahal, Kenny Wayne Sheppard, BB King, Beverly Guitar Watkins, Barbara Carr, Al Green and the Stylistics.  He has provided sound tracks and scores for countless events and movies.   Living Blues Magazine honored Cool John for two consecutive years as Most Outstanding Guitarist, and he has featured in international publications to include the National Geographic magazine.

Taj Majal stated that “Cool John Ferguson is among the five (5) greatest guitarists in the world and is a force to be reckoned with in the music industry.  Cool John is among the ranks of Jimi Hendrix, Wes Montgomery and Django Reinhart.”

Cool John’s fans will tell you emphatically, “He is the best of the best guitarists in the world.” Cool John is a recording artist, and his most recent CD is  “With These Hands.”